In the early morning, Japanese roads suddenly become even more narrow than before. This is when people put out their garbage in the assigned garbage collection points. In most cities, you are not allowed to put out garbage before the morning of the collection day, and between 8 and 9, the garbage trucks come to pick it up. Covered in yellow or green nets to keep the crows away, the garbage collection points swell with disposed garbage to fill up half the narrow streets. 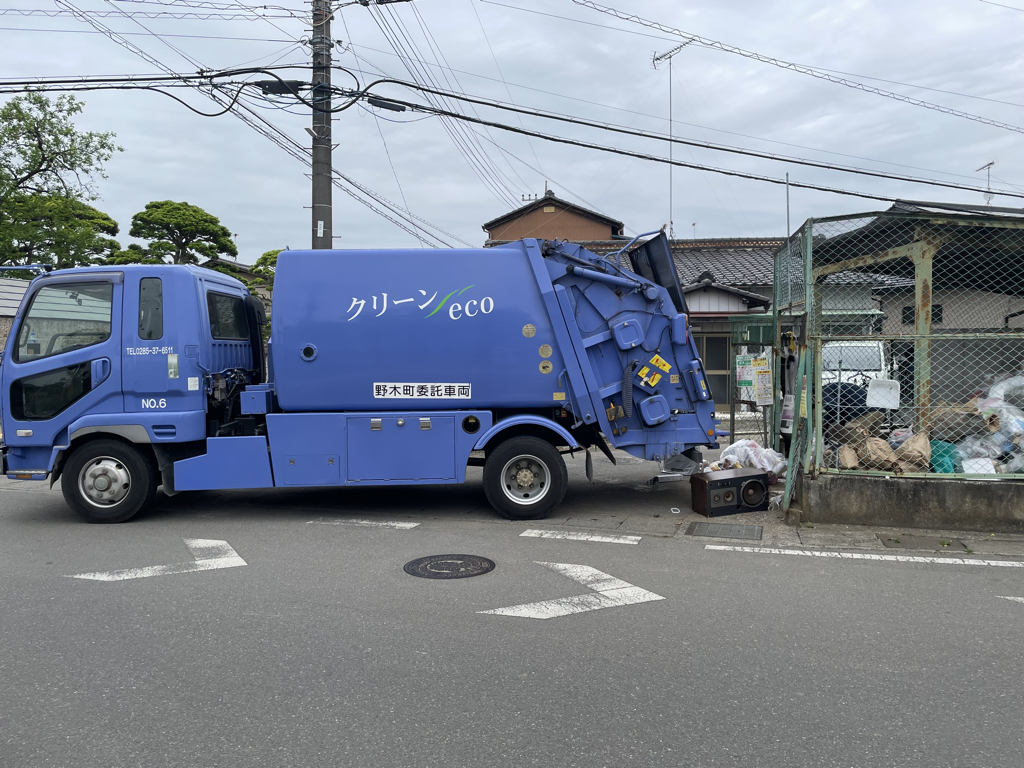 Garbage trucks pick up garbage in Japanese cities almost every day - but not any garbage.
But not every day. In Japan, recycling is a way of life, and was long before the modern way of life. Carts collecting used clothes, metal, and anything which may be sold were a feature of the Edo era back streets, although at this time, human waste was another collection target, used to fertilize the rice fields around the major cities.
Today, what is not collected by the city is taken care of by small trucks traveling around the streets of residential areas, calling out their services through loudspeakers and asking if the households do not have any metal or electronic goods. 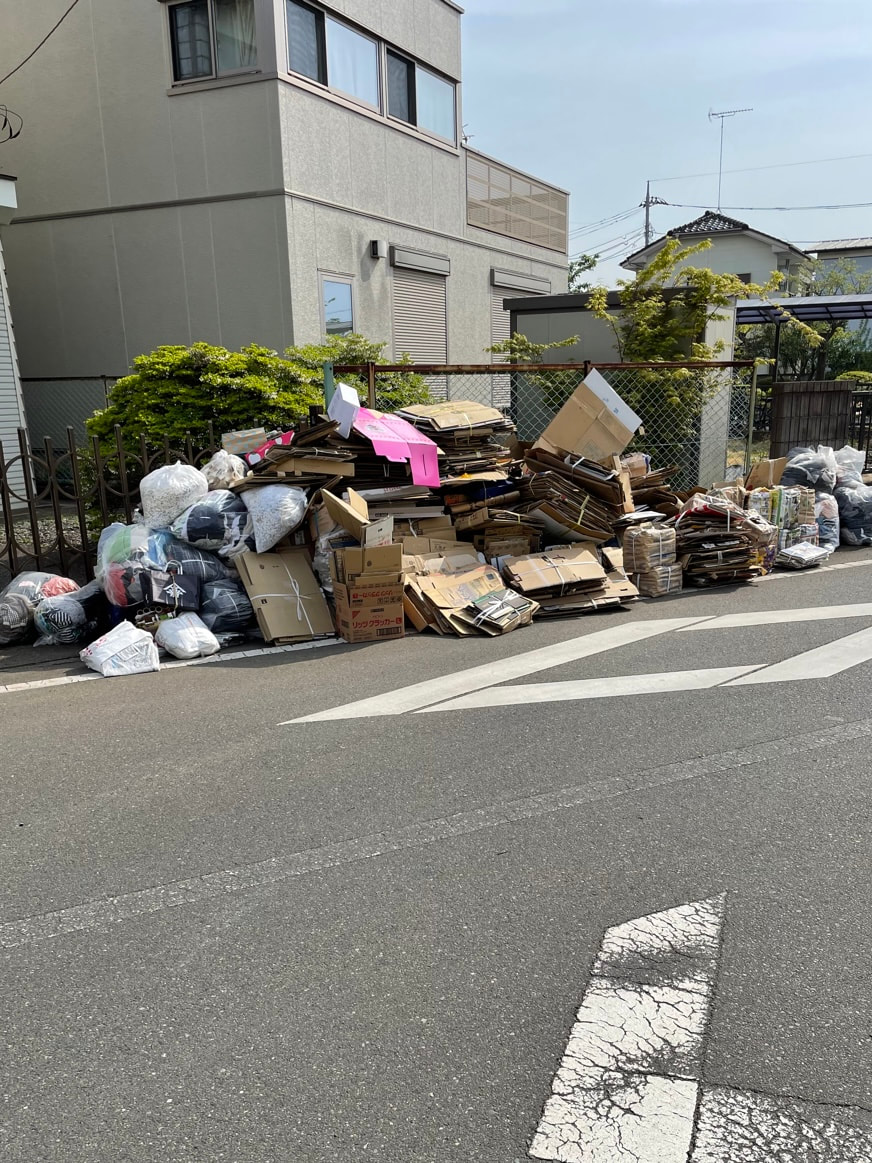 Before pickup garbage can be a seroious obstacle on Japanese streets.
But most garbage is collected by the cities, and either burnt or recycled. Everyday a special type of garbage is collected, as posted by the city on public signboards. But make a mistake, drop off something not following the rules, and the city will not pick it up, but leave it at the collection point.
In most cities, people are expected to drop off their garbage between sunrise and about 08:30, when the garbage truck comes and picks it up. This means the normally wall-hugging heavy bird nets (needed to keep the crows away) bulge out into the street with deposited garbage, forcing cars to drive even slower and stop for meeting cars. And on top of that, drivers have to watch out for seniors toddling out into the road to deposit their garbage, oblivious to approaching cars.
Usually the nets disappear onto the walls again, but if someone has deposited the wrong kind of garbage, the garbage truck crews will affix a sticker (the wording is slightly different in different locations), that says something like “Let’s keep the rules and put out the right garbage at the right time”. And they will leave the offending garbage bag for the owner to pick up at the right time. Until then, it will continue to keep the net extended and narrow the road. 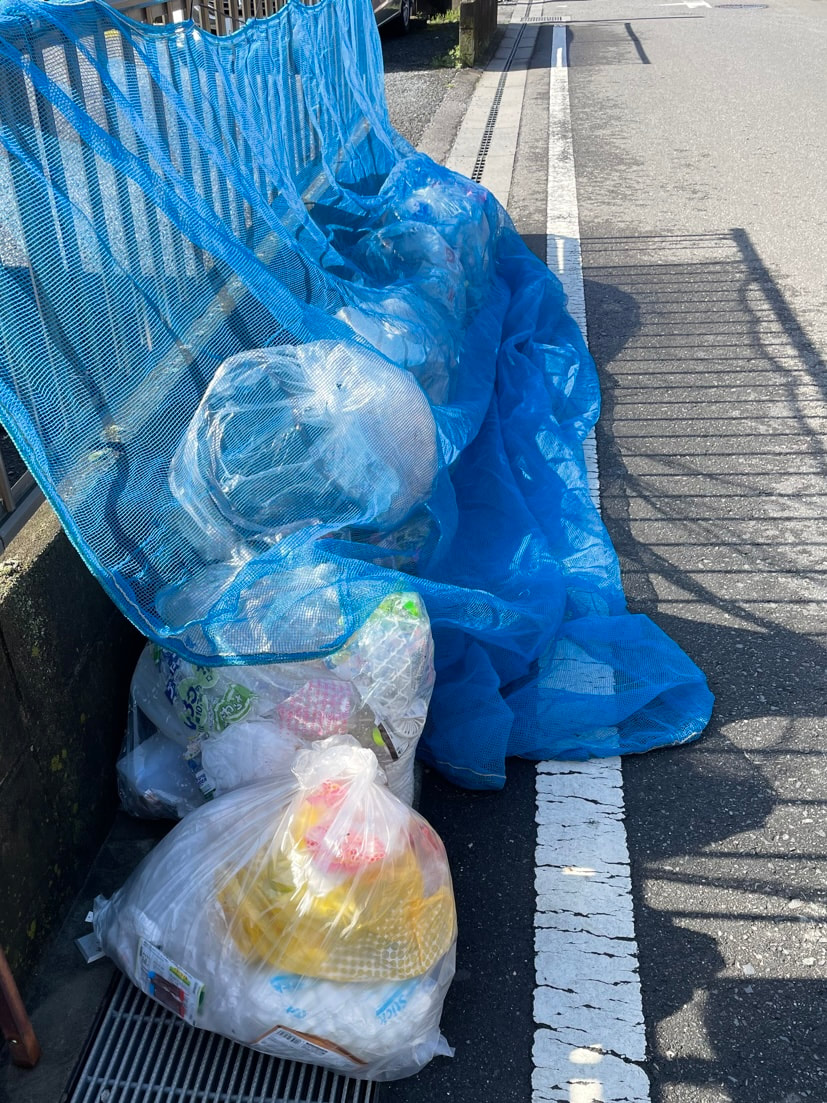 A heavy bird net keeps the crows away - otherwise they are likely to hack the bags open and get at any foods scraps inside.
Keeping track of which garbage goes where is not always easy. If it were, nobody would take out the wrong garbage. But sorting the garbage is notoriously tricky. On some days, you are supposed to take out only recyclable plastics, printed (or stamped) with the “pura” mark. On other days, non-recyclable plastics; but either day, not plastics which are too dirty. And in any case, never PET bottles, which have their own days (after being stripped of their colorful covers and caps, which are recyclable and non-recyclable, respectively). Cans and glass bottles have their own days, as do old clothes and broken tableware. Leftover metal is sorted separately from cans, but not together with used frypans and knives. And you can never throw away large garbage or used household appliances - for those you need to buy a special recycle coupon and book a time for pickup on the city website, except for appliances containing freons which have to be recycled separately.
It can become so complicated that people keep their large garbage around the house - and often smaller garbage as well. The different kinds of garbage sit there, becoming a nuisance and occasionally a health hazard, until it is time to tear down the house. By then, the contractors could not care less. They send everything to the garbage incineration plant.