June 27, 2011: How To Navigate A Japanese Hotel Breakfast

Now that tourists slowly may be coming back to Japan, many will be staying in hotels in and around the big destinations, and in particular in and around places like Tokyo Disney Resort (Disneyland and Disney Sea) or Osakas Universal Studios Japan.
The hotels around the destinations are even more internationalized than even other large hotels in Japan, which means they have information signs in English (English-speaking staff may occasionally be available, but this is by no means guaranteed). You are usually able to mime your way through checking in and getting to your room (the hotel staff usualy brings the luggage to the room), but breakfast is another matter. 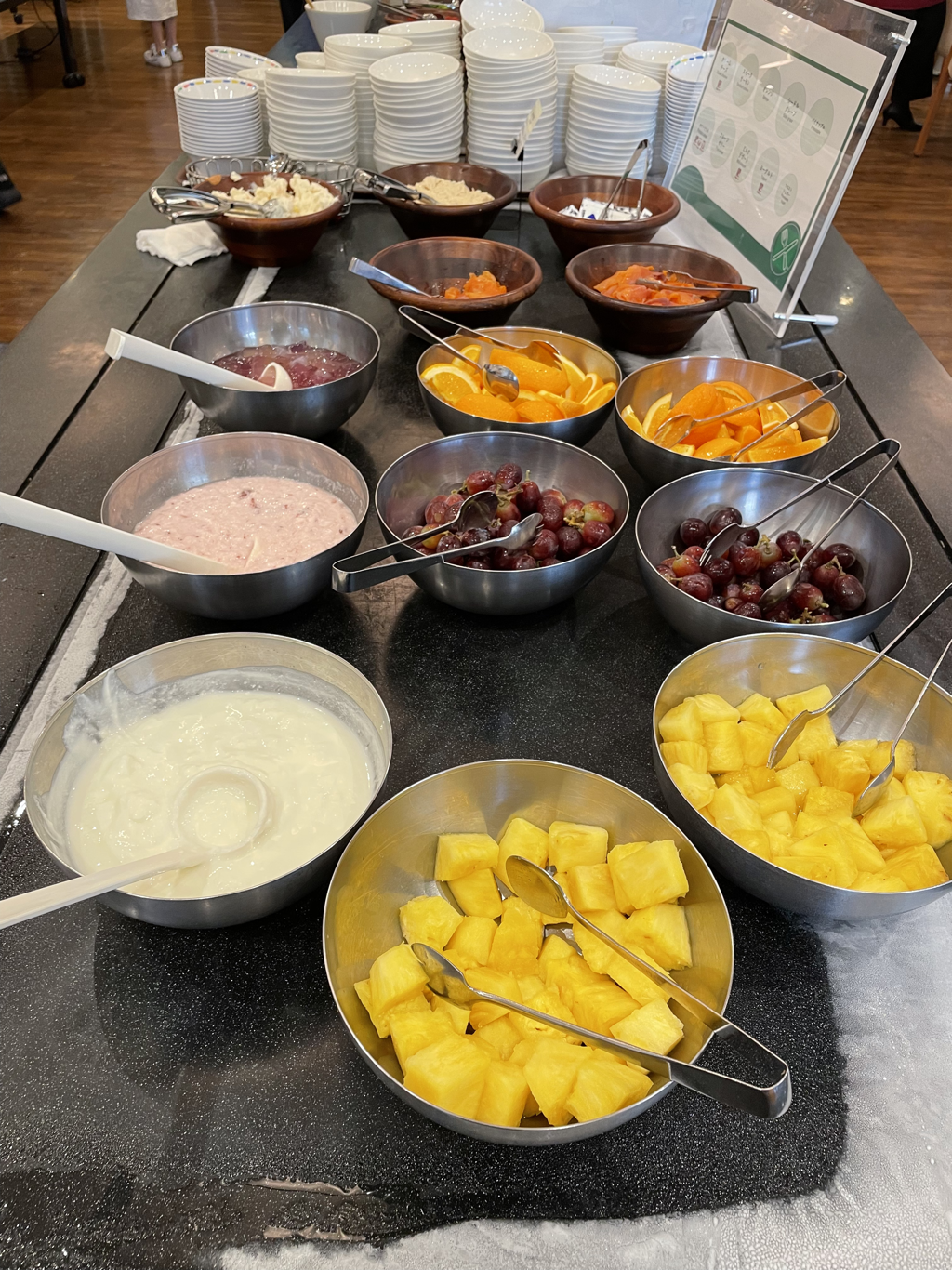 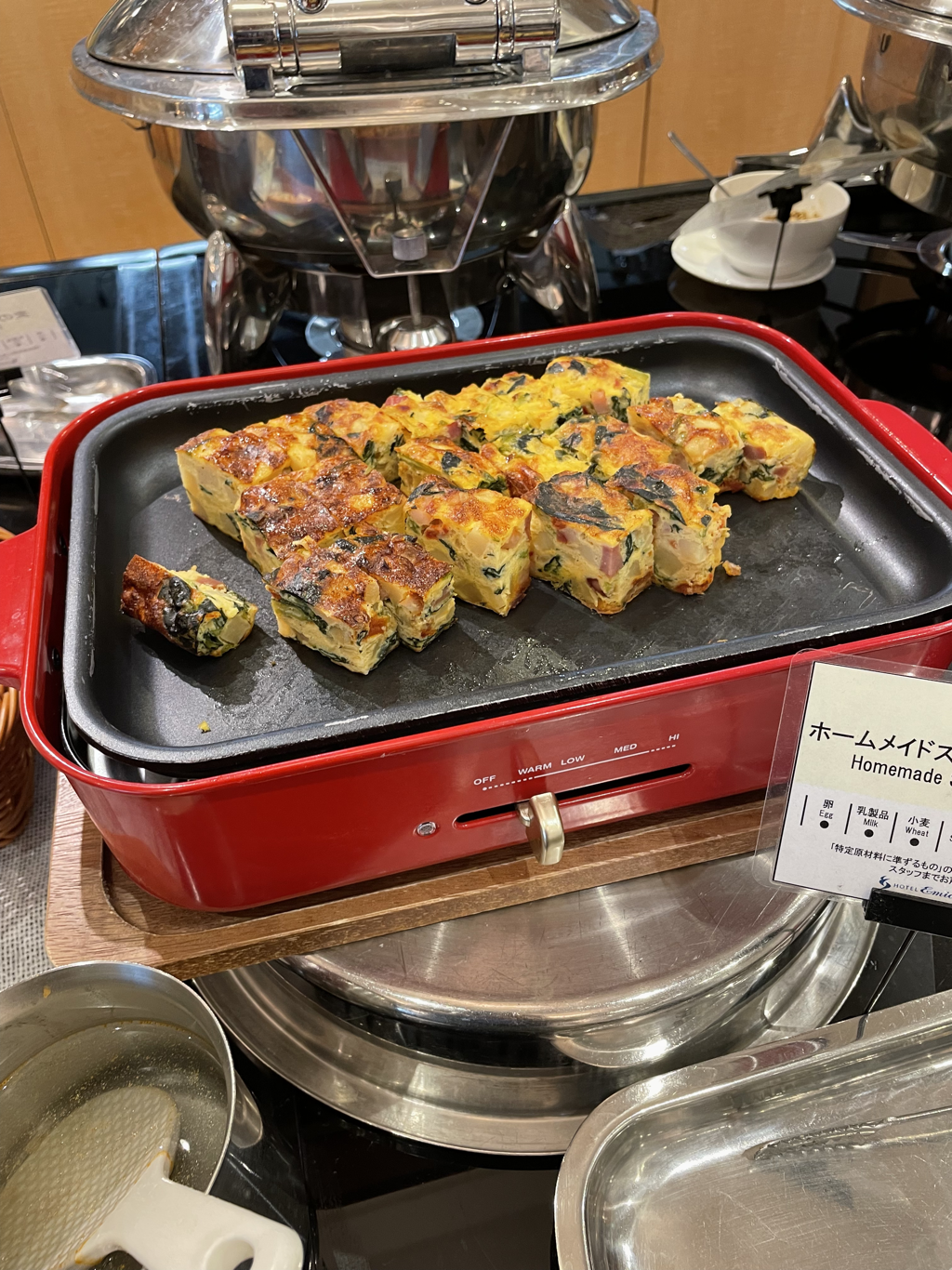 A traditional Japanese breakfast consists of rice, grilled fish, often a slice of Japanese omelet, pickled vegetables, and a bowl of miso soup - which is not just miso in hot water, but broth made from boiling dried fish flakes; and some vegetables (usually seaweed). Most people in a hurry replace it with an onigiri - a rice ball with filling wrapped in nori, the green paper-like seaweed sheet.
But a good hotel breakfast should contain more, especially if you are going to Disneyland, Disney Sea, or USJ (Universal Studios Japan). Those parks are so large that you will do a lot of walking between standing in line for the attractions. This will make you hungry, but especially around lunch time, the lines are no shorter than for the attractions.
Having a good breakfast helps, and also helps save money in the park (where food and drink are famously expensive). The most cost-effective option are popcorn, and there are daily varying flavors in the different stands, as well as popcorn containers varying with different attractions and events. The Star Wars BB-8 droid popcorn container has become a collectors item, as is often the case with short duration items connected to Disney movies.
But when you are staying in one of the Disney partner hotels (the most cost-effective option for visiting Tokyo Disneyland and Tokyo Disney Sea), the breakfast offerings can be confusing, English information signs notwithstanding.
Typically, the big hotel breakfasts - especially in big destinations like the Tokyo Disney Resort - consists of three parts (or maybe four, if you count the fruits and vegetables separately).

There is a Japanese breakfast, a Western breakfast, and a Chinese breakfast. Plus bread and baked goods, usually Danish pastries, which typically count into the Western breakfast, as does the coffee. But not all hotels serve green tea even with the traditional Japanese breakfast, as many peoples morning routine in Japan has changed towards orange juice and coffee.
The Chinese breakfast usually consists of rice gruel (congee), usually flavored with seafood or vegetables. Chinese congee is very different from its Japanese correspondence kaiju, not when it comes to the rice but when it comes to the flavoring. Where Japanese kaiju is typically served to ill people or small children, Chinese congee is served to healthy grownups. The difference is not so much in the preparation as in the flavoring. Both consist of rice grains boiled to a mush, but the Chinese congee is flavored with salty and umami flavors, whereas the Japanese flavorings lean more towards fruity-sour and vegetable flavors, like umeboshi and green soybeans.
PERSONALIZED PORRIDGE
But that is before you personalize the congee, or kaiju. Adding things into the gruel, like thousand-year-eggs, salty fermented fish entrails, or salted fermented fish roe, hives different flavors to the congee (or kaiju). But in most hotels we have stayed, the flavorings are nowhere close to the rice gruel; they are on the table with the other condiments, and it can be hard to pick out what to put in.
Especially since rice with an assortment of vegetables and seaweed, and often an egg cracked on top, is a popular morning dish in Japan - so popular that you can buy it as a set breakfast meal in the Sukiya fast-food restaurants. This is with normally cooked rice, however. 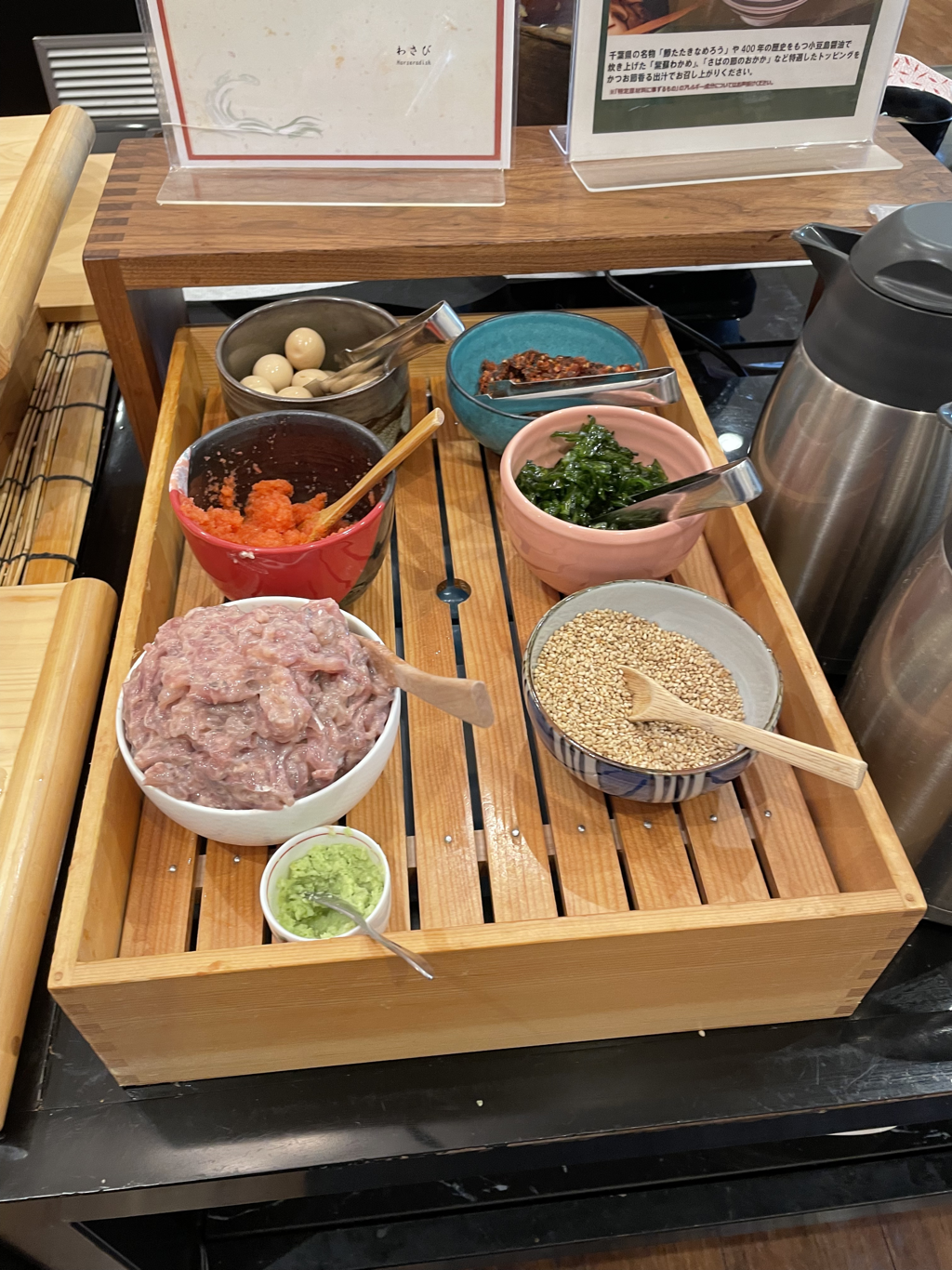 While the kaiju (or congee) flavorings typically run towards the fermented, salty kind, the toppings for normally cooked rice tend to run towards more flavor-neutral. And usually with a consistency that is running towards slimy. Okra, originally an African vegetable, is very popular mixed with natto (fermented soy beans) and seaweed (pickled in vinegar) This ”neba-neba” slimy consistency is so popular that baseball teams in Ibaraki (the home province of natto) play songs about it between innongs, and their cheerleaders perform a little dance to show rhe best way of mixing up the ingredients to the right sliminess. In the hotel breakfast, the okra is often on the table among the Japanese vegetables, but the natto is in a special refrigerator. Natto is usually served in a small paper cup, or a square styrofoam box, which you have to open, remove the inner plastic, and pour in the daice before you whisk it with your chopsticks. If you want to add okra or chopped scallions you do it on top of the natto, after pouring it onto the rice. Adding an egg (or only the yolk) adds to the flavor; some people also like to add mayonnaise, but this is normally not part of the hotel breakfast. It is usually the consistency which puts off visitors to Japan, they usually like the taste and it iis actually a superfood. Eat it wrapped in nori, the green paper-like seaweed sheets in the small plastic packages. It takes some practice to pick up and wrap the rice and natto nicely in the nori, but by the end of the trip you are likely to have become very good at it.
NON-SLIMY NATTO ALTERNATIVES
If you do not like the consistency of natto, there are plenty of other things you can try on your breakfast rice. I have already mentioned mentaiko, the spicy fish egg paste that also goes well with rice gruel, but there are usually several alternatives, including fish flakes and seaweed of different shapes and tastes; the one that adds most to the rice is konbu, made from soysauce-marinated kelp seaweed, with seasoning. Kelp is one of the few plants that have an umami taste, which stimulates the same taste buds as meat.
The toppings for rice that you find at the hotel breakfast is usually the same that you would find in the onigiri in a convenience store, but the quality will be higher and they will taste much better, often because they are served with freshly cooked rice. To serve local rice is a matter of pride for Japanese restaurants, especially ryokan that represent their region, but at large city destinations there are no local producers, and the rice can come from anywhere in Japan, typically Niigata which is famous for the quality and taste of its rice.
There are usually a few pickled vegetables next to the rice toppings, often pickled cucumber and daikon. Typically they are pickled with vinegar, although the daikon, the Japanese giant radish that normally has a white flesh, might be pickled with fish flakes that turns it yellow. And of course, there is usually umeboshi (although that may be considered more of a rice topping) and sometimes pickled shallots, or other seasonable vegetables. Pickling is a very popular way of preparing vegetables, but it is rarely used to preserve vegetables seasonally. Instead, Japanese vegetable preservation is a way to make vegetables more palatable within the next few days, or maybe next few weeks.
The typical pickled selection on a Japanese breakfast buffet might also have vegetables which look surprisingly fresh, hardly wilted or preserved at all. Usually cucumber or daikon, sometimes also carrots or other vegetables.
This is lactic acid pickling, nukazuke (糠漬け) in Japanese. The vegetables are pickled in rice bran, but the bacteria which generates the lactic acid come from the environment (moatky the hands of the pickler). The rice bran provides a convenient substrate, and also adds minerals. And of course, rice bran is abundant in a rice cultivating country. The taste is surorisingly refreshing, if taken out just when ready, adding a sour note to the vegetable taste. If you leave the vegetables in the pickling bran they will become sour, and then as the lactic acid bacteria penetrate them, gradually more sour until the lactic acid bacteria consume the vegetables. 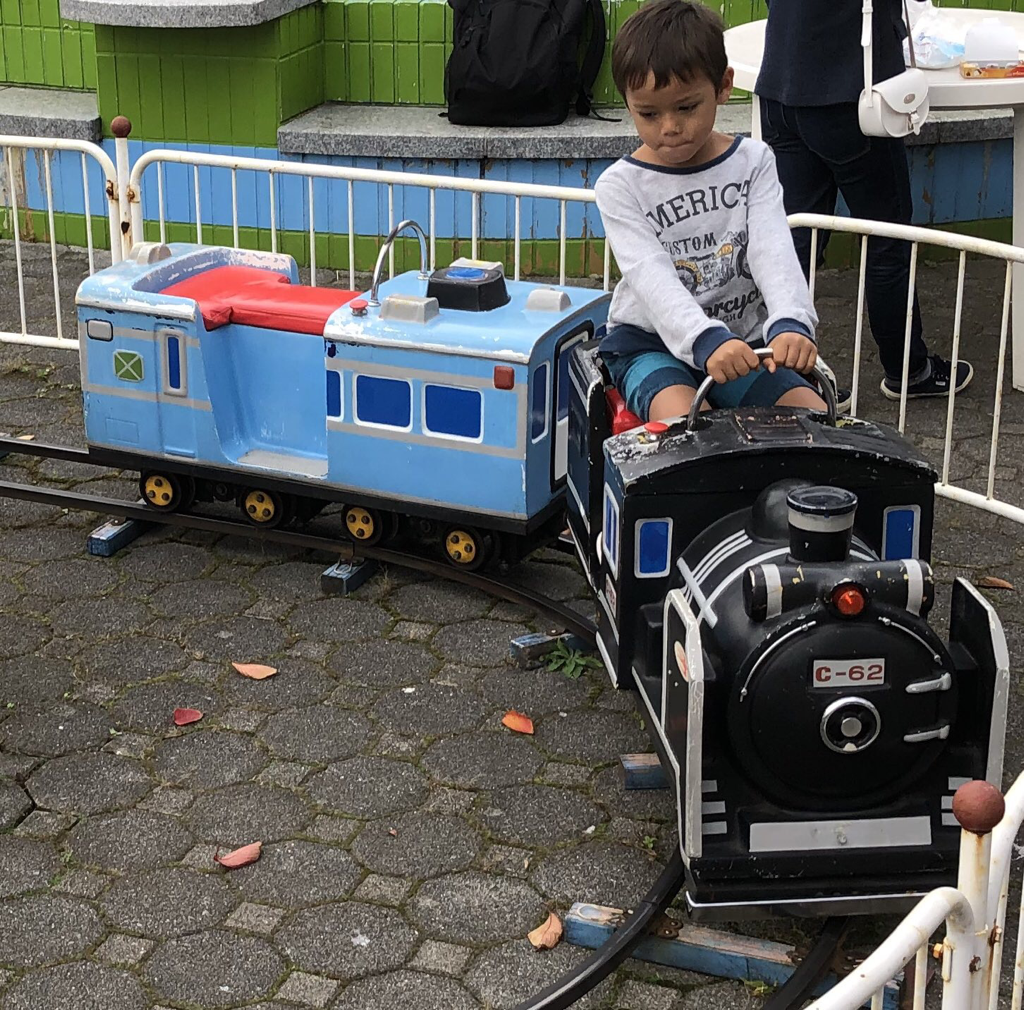 GRILLED FISH AND OMELETS
There are more toppings than the preserved seaweed and vegetables. The yellow block is a Japanese omelet, often sweeter than you may be used to since sugar is a traditional spice in the Japanese kitchen, and flavored with broth made from fish flakes.
Next to it is usually grilled fish, the kind often depending on season. In winter, it is typically salmon, in summer tai, and in spring and early summer shishamo, small fish that you eat whole, full of roe and carefully grilled over charcoal until crispy on the outside and bursting with flavor and juice on the inside. Watch your children near the charcoal grill, it is quite hot. 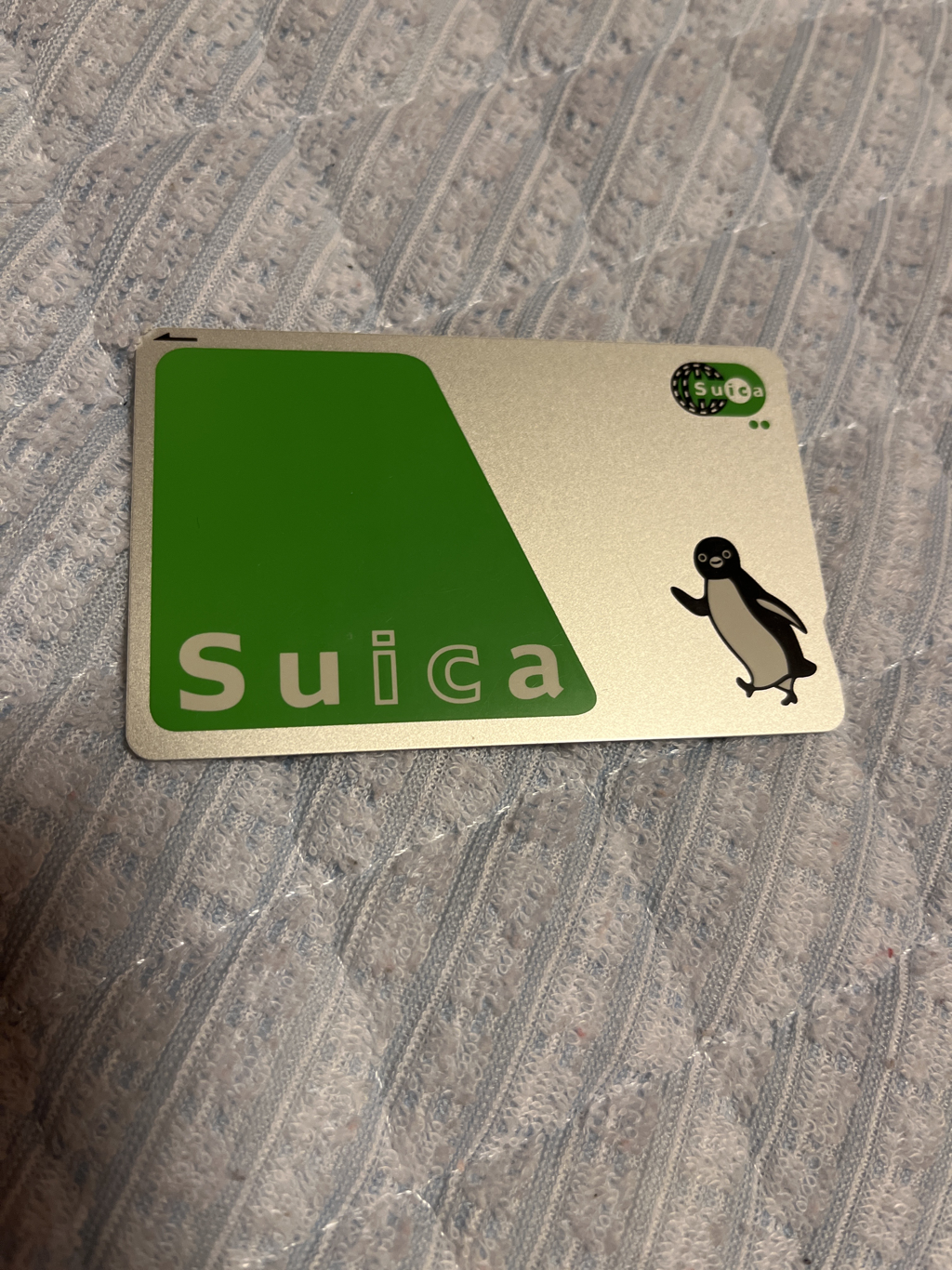 The last major ingredient of a Japanese breakfast is what you typically take first, and start with eating: the miso soup. Usually this is a huge kettle with a ladle in it. This is made with fish broth and fermented bean paste, usually with pieces of tofu and deep fried tofu, as well as dried wakame (a kind of seaweed) and fu, wheat gluten that could pass for bread, the rings or balls in the tray in front of the miso soup server.