In Japan, rainy days are more common than sunny. Even if most days are not like the rainy season, which is traditionally considered to start at the end of May and last until the end of June, when the typhoon season starts.
With global warming, the westher patterns have started changing. There are typhoons already in April, and the typhoons go further north than they did before. The Tohoku region, and the northern island of Hokkaido, used to be free from typhoons. 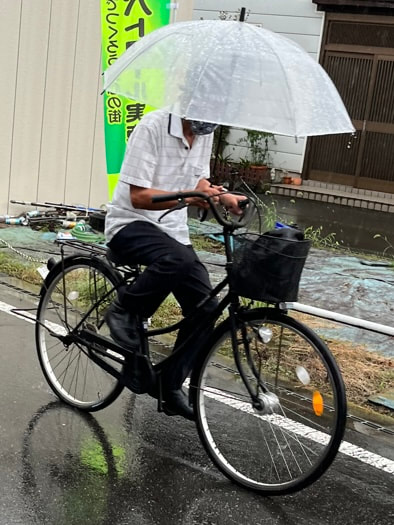 Riding your bicycle with an umbrella to ward off the rain is so common you can buy umbrella stands for bicycles.
A typhoon combines extreme rain with extreme winds. It can be dangerous to go out, and dangerous to drive. A car can easily be swept off the road, especially when the roadbed is slippery because of the rain. But trees can be felled by the wind, and branches pulled off by the wind, becoming projectiles in the wind. And things which are not as well anchored as a tree branch get blown away even easier. Every year there are deaths from things blown away by the strong winds, even gruesome events like people being decapitated by flying signboards.
The few people who do go out to brace the storm - which even can cause delays on the Japanese railways, including the mighty Shinkansen - risk their umbrellas being flipped outside in and broken by the winds. Typhoon times, and even more the entire rainy season, is when umbrellas become bestsellers in Japans countless convenience stores. Priced around 500 yen, they are cheap enough that you can get a new one when the wind broke the one you were using - or when you forget your umbrella on the train. 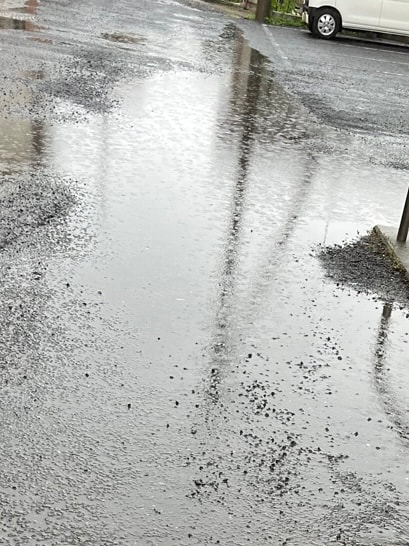 Deep puddles can quickly become traffic hazards.
To close the storm shutters is one of the few things which can make Japanese salarymen go home earlier from the office. In older houses, this means an extra set of doors which has to be mounted outside the light sliding French windows which normally serve to keep the weather out. In new houses, closing the sliding shutters is enough. But regardless, few people try to go out in weather that will turn your umbrella outside in and drench you in seconds.
In big cities, you can go to the underground shopping malls connected to the stations. Most of the time you would never notice the weather, but typhoons and the rainy season can bring so much rain that the streets outside the entrances get flooded and water runs into the shopping mall.
But it is rare that streets flood so much that water runs into the basements. Mostly, it may happen in areas near big rivers, which can flood after heavy rain - which may not even happen in that area, but much higher upstream. And usually during the rainy season. 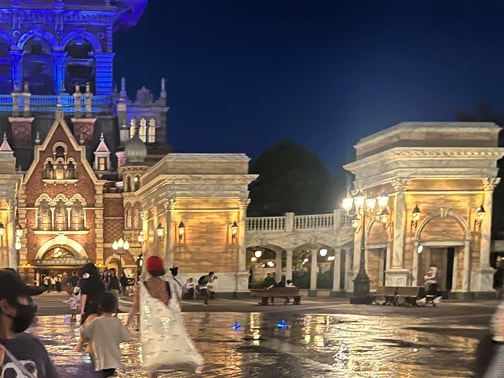 Tokyo can be beautiful - but is best after the rain.
Even if it can rain as much during a thunderstorm or typhoon as during the rainy season, those rains last a day at most, then the typhoon has blown past. But the rainy season is named that for a reason - because it really rains the entire season. Every day, every night. Some parts of Japan can see as much as 1000 mm per day, with landslides and flooding following. Most tourists avoid Japan during the last week of May and June. Or wish they had.
The rainy season typically ends as quickly as it started, with the clammy, foggy and wet days turning into clammy, steamy and hot days. Summer has arrived and the rainy season is over.
That does not mean the rains are over. Summer days in Japan can be hot, literally hot enough to fry eggs on the pavement, and the air builds up an electric charge that sooner or later breaks out in a thunderstorm.
In Tokyo and Osaka, where the cityscape stretches for miles and miles, punctuated by jagged skyscrapes, humanity has skewered the microclimate. The towering highrise islands are thunderstorm traps, and some parts of Tokyo get much more rain than others.
Thunderstorms can come suddenly and the rainfall can be so heavy that traffic has to stop because other cars literally become invisible. Carrying an umbrella hardly helps, and riding a bicycle makes you wetter than taking a shower with your clothes on. Thunder is hardly a danger as long as you stay near buildings, they all have lighting rods, but the lighting can be as entertaining (and loud) as a summer firework.
When the typhoon season traditionally was over, around September - October, the risk of rain decreases drastically, the parks and forests still lush with greenery not yet turned yellow, and temperatures dropping from the summer peak touching 40 degrees centigrade to a refreshing 25. But this does not mean the risk of rain has disappeared. There will not be rainfall every day, or even every other day, but it is a rare week that does not see a few drops falling.
During the days with normal rainfall, when you can shake off the drops on a towel and move on, people go out and about like usual. Train companies provide stands of forgotten umbrellas to use by customers who have forgotten theirs, and cyclists brave the wet streets, umbrella in one hand and more often than not their smartphone in the other. Even those with bicycle umbrella holders (yes, there is such a thing) become unreliable and a traffic hazard with a smartphone in their hands.
Umbrellas become a necessary accessory when going out, because even if it is clear at the moment, rainfall may literally wait around the corner, showers often highly localized and au point. During the rainy season, and rainy days other seasons, department stores and shopping centers provide long and narrow plastic bags, automatically applied when you insert the umbrella into the right aperture, so you do not wet other customers, or the merchandise. Make sure to throw it away in the right garbage basket when you leave. And count your umbrellas. Especially in big families, you usually end up with fewer umbrellas than children. Those umbrellas the railway companies lend you will come from somewhere after all.